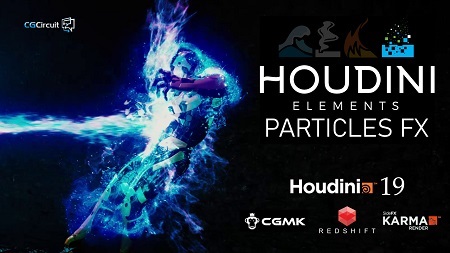 In this online course, the viewer will learn about Particles in Houdini while creating energy FX that will it interact with a character.

The course will start by preparing the character mesh for particle interaction. We’ll then move on to creating the main source of the blast with all the necessary attributes to generate a nice energy blast with POPs. After that, we’ll work on adding radial blast waves using FLIP. The third layer of the final effect will be another POP sim where we’ll have the energy blast envelop the character. We’ll finalize with some extra FX layer of electric arches and some sparks. Finally, we’ll bring everything together with a mix of render techniques but focusing on the super-fast Redshift.
Along the way, we’ll be exploring some of the brand new Houdini 19.0 amazing updates while learning many tips and tricks to work efficiently and get amazing results.
This course has been designed for beginner-intermediate users so I expect you’re already familiar with the essentials of Houdini. The complexity of the topics and assignments will start fairly simple but get progressively more complex throughout the course.
After viewing this course, people can expect to feel confident while creating complex Particle FX with Houdini using some advanced techniques and also rendering those FXs with Redshift and Karma in Solaris.