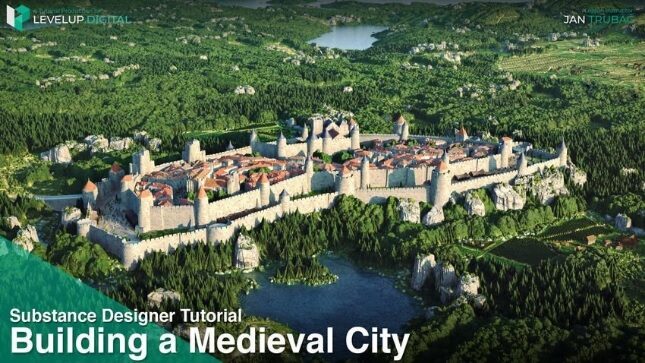 With inspiration from real-life Google Maps data, he accurately and with impressive detail – as well as ingenious use of Substance Designer nodes, demonstrates how to replicate satellite data. Using the lessons he’s learned from his previous Metropolitan City project, Jan shares best practices and common pitfalls when tackling this type of project.
In this tutorial, Jan shares his workflow for creating terrains and forests. For the city, he dives into how to use functions with basic logic to create wall and tower generators. You’ll learn how to build various objects like trees, bushes, rocks, as well as how to approach more complex structures like towers and a cathedral. You will also learn how to keep your graphs optimized without hurting the visual quality of the output. This tutorial is packed with lessons for anyone looking to push their creativity within Substance Designer.
Whether you are new to Substance Designer, or a seasoned user, the lessons from this tutorial will give you a great understanding of the core principles of SD, as well as equipping you with skills and knowledge to tackle large scale terrain/city projects like this.
Chapters
Creating the Base Forest
Walls and Towers
Building walls and Outer terrain
Inner City
Forest Features
Finishing Touches
Software Used
– Substance Designer
Level
Beginner to Intermediate
Prerequisite
Basic knowledge of software used