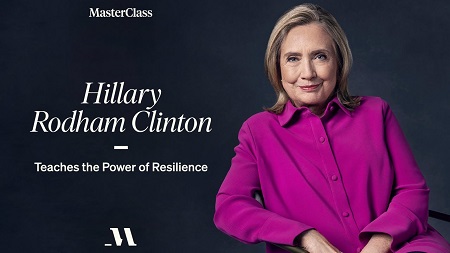 With a lifetime of smashing barriers and achieving at the highest levels of public service, Hillary Rodham Clinton has learned to tap deep wells of resilience to reach her goals. Now the former U.S. senator and secretary of state is teaching the values, lessons, and practical tools that help her rise above, even sharing her never-before-heard 2016 presidential victory speech. Be inspired to own your ambition and make your mark.

U.S. senator. Secretary of state. First female U.S. presidential nominee from a major party. With one of the most impressive résumés in politics, Hillary Rodham Clinton has been fighting to make the world a fairer place for decades. Her career is a testament to hard work and resilience in the face of adversity.

Now the barrier-smashing icon is teaching others to stand up for their beliefs and build lives of impact and purpose. After navigating the successes and setbacks of public life, she is drawing from her experience to help you find the inner strength to reach your most audacious goals.

Lessons in this online class include:
– Discovering Your Mission
– Hillary’s Framework for Hard Work
– Organizing a Busy Life
– Preparing for Public Speaking
– Studying Persuasive Communicators
– Maximizing Your Strengths and Learning to Pivot
– The Fundamentals of Negotiation
– Navigating Compromise and Trade-Offs
– Taking Criticism Seriously, Not Personally
– Ambition, Sexism, and the “Double Bind”
– Overcoming Setbacks
– Daring to Compete
– Bonus: Resilience in Action With Huma Abedin
– Exclusive: The “Would-Be” Victory Speech
– Choosing a Life of Resilience