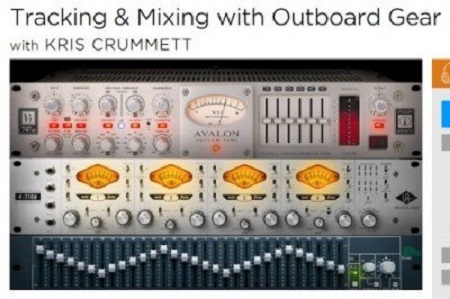 Class Description
get the inside scoop on working with outboard gear.

Pairing outboard gear with your digital set-up is a sure-fire way to get a professional-grade audio recording. In Tracking & Mixing with Outboard Gear, Kris Crummet will show you how adding some basic analog gear to your recording toolbox will lend pro-level character and depth to your mixes.

Outboard gear adds analog warmth and punchiness to a mix that simply can’t be replicated by software. If you’re an at-home producer who wants to add a little more sonic flavor than you can get in the box, you’ll need to incorporate outboard gear into your recording process. In Tracking & Mixing with Outboard Gear, you’ll learn analog gear basics from the guy who has produced some of this generation’s most dynamic rock/post-hardcore bands including; Sleeping With Sirens, Dance Gavin Dance, Alesana, Issues and more.

If you want to learn how to warm up your tracks with outboard gear, watch Tracking & Mixing with Outboard Gear and get an inside look at Kris Crummet’s approach to audio production.