Udemy – Learn Python by Making Games From Scratch From Zero to Hero
$20.00 Add to cart 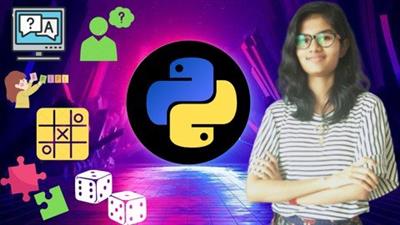 What you’ll learn
Learn how to make games using tkinter
Learn how the Object Oriented Programming is used in practice.
Create playable games, for your own sense of achievement.
importing pictures inside a game and making the game more attractive
Description
Have you ever wanted to build a game with a graphical interface but didn’t know how to? Maybe you even know how to create tools on a command line but have no idea how to convert it into a graphical interface that people can click on. In this course, we will be learning Python GUI Programming modules to build graphical user interfaces (GUI) and games from scratch.
Learn Python by developing fun games from scratch. This course is for everyone who has desire to learn Python. The game complexity increases with every section and you will be able to rise your knowledge throughout the course.
You will develop amazing games and you will see how Python works moving things on screen and objects interaction. You will also create and import pictures used in the games and get familiar with creating randomly movable enemies, animating the game characters and playing music and sounds while playing the game.
You will use Pycharm and Sublime text editor to create games with progressively increased difficulty. By the end of this course you will be able to fully design game including creation of objects and positioning of custom pictures and other components on the gameplay.
This course covers the following Python topics:
Animating game objects
Implementing loops and classes
Using Pygame package to simplify game development
Development of menu screens and buttons
Taking input from the keyboard
Randomizing game events
Resizing game objects