The Gnomon Workshop – Matching a Stylized Concept in ZBrush
$25.00 Add to cart

The Gnomon Workshop – Matching a Stylized Concept in ZBrush 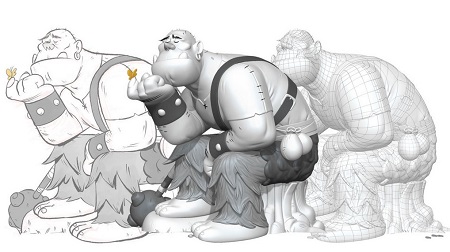 The Gnomon Workshop – Matching a Stylized Concept in ZBrush | 3.3 GB

Description
Learn how to translate a 2D stylized concept into a 3D character with this 6-hour workshop by Daniel Zeni. Using ZBrush and Photoshop, Daniel walks through the complete process, from selecting a suitable concept to coloring the character accurately and achieving a polished final image.

Daniel begins with an in-depth explanation of setting up a concept in ZBrush and shows how to use the Spotlight projection tool to your advantage. He instructs on sculpting the overall shapes and using Symmetry to align the body with the head as well as how to save out camera angles using ZAppLink. You’ll also discover how saved camera angles can help you further line up a mesh up with your concept each time you make a change, ensuring a close match to your original concept.
As a Gnomon School graduate with experience working in everything from effects for film and episodic animation to consumer products and mobile games, Daniel has an arsenal of tried-and-tested tips and tricks for character creation that he shares throughout 11 chapters. You’ll also learn his techniques for taking advantage of ZBrush’s ZModeler and see how it can be instrumental in a character-creation workflow, even for organic subjects.

The final stage of the workshop shows how to select the correct colors from the concept and a quick-and-easy way to achieve a nice, clean, final image ready for your portfolio.
The concept used in this workshop is by the talented Vi?t Nguy?n and used with permission.