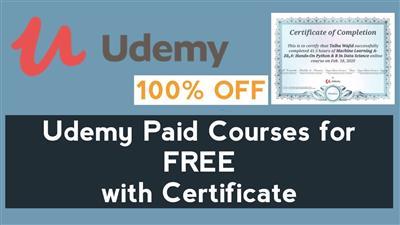 Learn Android 11 App Development From Beginner to Advanced Developer. Master Android Studio and build your first app now
What you’ll learn
You’ll have EXPERT LEVEL knowledge of the Kotlin programming language and know exactly how each process of Android 11 development works.
NEW CONTENT is always being added, and you’re covered with full lifetime access to the course.
Become a professional app developer, take freelance gigs and work from anywhere in the world
Make pretty much any Android app you like (your only limit is your imagination)
Bored with the same old, same old? Apply for a new job in a software company as an Android developer
The EXPERTISE to be an Android App developer as taught by the best.
Best course to learn Kotlin
Android Lifecycle
Android Studio
Android User Interface Development
Object Oriented Programming with Kotlin
Object Oriented Programming with Kotlin
The Android App Lifecycle
If you want to learn Android and earn Money then this course is for YOU !
Object Oriented Programming Training
Android Jetpack Architecture
Live Data, View Model and other android concepts
Best Motion Layout Training
Android KeyCycle
Learn android work as Freelancer or in Company be successfull developer !
and other awesome topics that not even discussed in other courses —>
Show more
Show less
Requirements
Just the computer that runs Android Studio (4GB RAM) and (10 GB HDD or SSD) is OK !
Description
*Printable online certificate available upon completion of course*
Google considers Kotlin an official (first-class) android Developing Language
Android has ruled the app market for the past decade, and developers are increasingly looking to start building their own Android apps. How to Build Android Apps with Kotlin starts with the building blocks of Android development, teaching you how to use Android Studio, the integrated development environment (IDE) for Android, with the programming language Kotlin for app development.
Then, you’ll learn how to create apps and run them on virtual devices through guided exercises. You’ll cover the fundamentals of Android development, from structuring an app to building out the UI with Activities and Fragments and various navigation patterns. Progressing through the chapters and lectures, you’ll delve into Android’s RecyclerView to make the most of displaying lists of data and become comfortable with fetching data from a web service and handling images. You’ll then learn about mapping, location services, and the permissions model before working with notifications and how to persist data. Moving on, you’ll get to grips with testing, covering the full spectrum of the test pyramid. You’ll also learn how AAC (Android Architecture Components) are used to cleanly structure your code and explore various architecture patterns and the benefits of dependency injection. The core libraries of RxJava and Coroutines are covered for asynchronous programming. The focus then returns to the UI, demonstrating how to add motion and transitions when users interact with your apps.
By the end of this course, you’ll have the skills and confidence needed to build fully-fledged Android apps using Kotlin.
Are you trying to start a career in Android programming, but haven’t found the right way in? Do you have a great idea for an app, but don’t know how to make it a reality? Or maybe you’re just frustrated that to learn Android, you must already know Kotlin. If so, then this course is for you
When Android first arrived in 2008, it was a bit drab compared to the much more stylish iOS on the Apple iPhone/iPad. But, quite quickly, through a variety of handset offers that struck a chord with practical, price-conscious consumers, as well as those who are fashion-conscious and tech-savvy, Android user numbers exploded. For many, myself included, developing for Android is the most rewarding pastime and business, bar none. Quickly putting together a prototype of an idea, refining it, and then deciding to run with it and wire it up into a fully-fledged app, is such an exciting and rewarding process. Any programming can be fun – I have been programming all my life – but creating for Android is somehow extraordinarily rewarding..
n
Kotlin is the most succinct language, and therefore is the least error-prone, which is great for beginners. Kotlin is also the most fun language, mainly because the succinctness means you can get results faster and with less code. Google considers Kotlin an official (first-class) Android language. There are some other advantages to Kotlin that make it less error-prone and less likely to make mistakes that cause crashes. We will discover the details of these advantages as we proceed.
Kotlin is an object-oriented language. This means that it uses the concept of reusable programming objects. If this sounds like technical jargon, another analogy will help. Kotlin enables us and others (like the Android API development team) to write code that can be structured based on real-world things, and here is the important part – it can be reused.
Who this course is for:Beginner Kotlin DevelopersBeginner Android Developers who wants to learn Android Application DevelopmentIf you want to learn Android and earn Money then this course is for YOU !Learn android work as Freelancer or in Company be successfull developer !