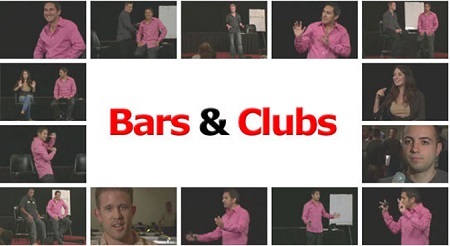 If You Learn The Simple Secrets I’m About To Reveal, You Can Confidently Go To A Bar Or Club, Approach The Most Attractive Women, And Walk Out With More Phone Numbers And Dates Than You Can Handle…

I’m going to describe three scenarios. As you read them, I want you to pay careful attention. Let’s see if you’ve ever been in any of them:

You’re out at a nice place having a drink, and you notice a woman that’s very attractive. You make eye contact with her. For a second, you feel like you “have a chance” with her. She looks again. You feel the feeling again. But you don’t know how to start the conversation. She’s probably been approached by a dozen drunk guys already… you wonder what you could possibly say to her to get her attention and have even a CHANCE with her. By the time you figure out what to say and work up the courage to talk to her, you look back over and she’s gone. Or talking to a different guy. Later that night you think back to that moment, realize that you had nothing to lose by talking to her, and mentally beat yourself up for not just walking over and talking to her. In your mind you resolve to just DO IT next time… but you still feel a sense of loss because you didn’t talk to THAT girl. She’s gone. And you’ll never get that chance again. Wouldn’t it have been great if you had a “lock and load” approach and system to start a conversation, create some “chemistry”, and get a phone number quickly when one of these situations comes up?

You know a guy. He might be a past or present friend… or a friend of a friend. He’s not a rich guy. He’s not a handsome guy. He’s not even a particularly smart guy. But what he lacks in money, looks, and intelligence he makes up for with his ability to meet women. Every time you’ve been out with him at a bar or club, he ALWAYS meets a girl. Or girls. Plural. And it just doesn’t make any sense. Somehow he just UNDERSTANDS the bar and club environment… and how to meet women when he’s there. You and all the other guys work to get scraps, while he takes what he wants. Wouldn’t it be great to know what he’s doing, and be able to do it yourself?

You’ve been to enough bars and clubs to see the pattern. Attractive women who obviously have NO problem getting attention from men… they fix themselves up, put on the sexiest clothes, and literally look like they’ve gotten themselves ready for a glamour photo shoot… just to go out for the evening. They carry themselves in a way that says “I am a powerful sexy woman, and this sexy face and body can get me anything I want.” You KNOW that they can have any guy they want. You know that every guy is looking at them and drooling. But you ALSO know that she’s just a woman. And you know that if you only knew HOW to do it, you could get her attention and connect with her. What would it be worth to you to know how to break through her “beauty power barrier,” start a conversation, and get a date with her?

Now, as you were reading those scenarios you might have been wondering how I could describe situations you’ve been in so perfectly. The answer, of course, is that I’ve LIVED those situations over and over and over…

If you’ve checked out my newsletters or my dating products, then you already know that I’ve spent a long time working to figure out exactly how guys can approach and meet women, spark attraction, and get dates. Well, part of that education was “in the field”… I spent a lot of time learning and testing every trick, technique, and idea I learned… and I chose the best place in the world to do it: The bar and club scene.